Traveling to Kazakhstan I met with Edda Schlager. She is a German journalist and photographer, documenting life in Central Asia. She also is about to publish her first book, an architectural guide about Tajikistan’s capital Dushanbe.

Edda had a lot of interesting stories to tell about Central Asia, her work as a journalist and photographer and her book. She agreed to do an interview with me which I would like to share with you.

You mainly work as a journalist. When did you start to take photos as well?

Yes, I’ve been working as a journalist for twelve years now, but I’ve been taking photographs from my childhood on. I think I got the first camera when I was ten or something like that. My father loved photography and even had his own darkroom where I joined him regularly as a child. And, as soon as I started to work as a journalist and to sell my articles, I felt urged to deliver the stories together with photographs. The simple reason: Stories are often told better with pictures then by words only. Also, I did not report a lot of news, but mainly wrote background stores and features, and noticed that there were no stock photos available that fit the places or stories which the editor could have used. If I tell the personal stories of protagonists, then, of course, it’s nicer to see on a picture how they look like. What additional expression is there, which I could not tell in the written story? So, in the best case it gives the article an additional dimension. And, not less important, I suppose, stories can be better sold together with good pictures.

How did you learn photography?

Oh, I’m not sure that I learned it, I am still learning. And often I feel insufficient, especially when it comes to the digital editing process. But okay, I think photography foremost is the question of having the sense for tension in a picture, in German it means “einen Blick haben”, to have a view, a certain look at things. This tension can be either caused by varying depth of field, or by composition, colors and contrasts or by the motive and its interactions with, again, all these technical parameters of a photograph. So, probably, I do have some kind of sense for tension and I try to improve it constantly. The basic technical knowledge, of course, is important and I read some books on photography and on the cameras I am using. For me it is always important what the others are doing? I love photography and I love looking at good pictures. It’s kind of satisfying and inspiring. Also, I read the making-of of pictures, or discussions on how certain pictures might have been made in a better way. And, yes, I am taking pictures, always trying to find something new, testing different settings, different equipment.

You are mainly working in Central Asia. Why is that region interesting for photographers?

Simple answer: Because it’s not yet as often and widely photographed as other regions. Central Asia in general is quite unknown. Often people mix the -stans, countries like Kazakhstan and Afghanistan, and ask me: Isn’t there war, or isn’t it dangerous to travel there? But I have to admit, before I came here I didn’t know much either. There are the five Post-Soviet republics Kazakhstan, Kyrgyzstan, Tajikistan, Turkmenistan and Uzbekistan, and they are different from Iran, Afghanistan, Xinjiang or Mongolia, due to their younger history which is tensely connected to the former Soviet Union. I am always struggling with stereotypes, as journalist as well as like a photographer. For example, in the western world we speak about Central Asia, taking for granted that these countries are the same in some way. But for 25 years now these states are looking for their own identity and they don’t see themselves so “Central Asian” as we do. I think, as a journalist, I have to keep this in mind and I have to respect this. And I, as storyteller, can show this directly, from the very personal point of view of different people: What does them move? What’s important for them? I use this as a means to show what these countries are about.

You recently worked on a book called Architectural Guide Dushanbe where you took most of the photos. Why is it interesting for you to photograph architecture?

This book was an outstanding experience for me, especially regarding my photography. Actually, for the first time I took so much time only for photographing one single subject: The city of Dushanbe. I was asked to “write” the book, but as this series of architectural guides by DOM publishers has a strong visual focus, I just accepted the challenge to photograph the city by myself. There are some historical photos, too, but almost all current photos were taken by me. I really walked the city’s streets. Some days I was on the road from early morning to the evening in the heat of the Tajik summer with heavy equipment, always looking upwards, photographing the facades. One important part of these architectural guides is a so called “documentation of buildings”, which means short profiles of houses or urban structures. Therefore I had to get the character of buildings in only one to three shots. That meant looking for a good angle, a good perspective, the perfect light, and see all important details. I always wanted an unusual twist, something special. There is this old movie theater with the typical columns, arches and ornaments of the Socialist Realism from Stalin’s times. I managed to enter the old backyard, which was used as open air cinema previously. Now there are guards drying carpets and rampant grass is growing beneath the destroyed walls. When I looked through the photos afterwards I discovered that I often “accidentally” photographed people, as well, which connected the buildings to the residents of Dushanbe. In the end that gave the photographs a typical local touch, a different impression. Much more than it could have done a picture that shows only the construction. I liked this approach very much.

I am not a photo-artist. Conceptual photography is not really my cup of tea. I am more a photojournalist, a documentary photographer, even if I don’t take photos for a specific story. Often you find people in their social environment in my photos – and that’s what I like the most. In 2005 I came to Central Asia to learn Russian. I did learn it, and now, to my own surprise, that gives me a close connection to the people I am photographing. I remember a shot, also in Dushanbe: Young dancers in black suits at the windows of the Philharmonic Hall, a quite austere, linear building. While I was shooting I “flirted” with them, kept them interested in this “shooting session”. And I got one of my favorite pictures with a strong contrast between the hard lines of a concrete building and the softness of these girls. I like landscape photography, as well, but in this area there are so many photographers much better than me. I also find drone photography quite interesting, although I didn’t try it myself so far. It gives so many new opportunities and perspectives

What is a good photograph for you?

A moving, touching, not necessarily technically perfect one. I am literally overwhelmed with all this perfectionism in color correction, HDR photography, digital retouching, pixel counting and the competition of photo gear. Yes, a photographer has to be able to master the gear and to digitally edit pictures. I am grateful for the opportunities of digital photography and the ability to adjust settings afterwards. But, to be honest, one of my best pictures ever – two armed soldiers and a little Afghan boy – I took ten years ago with a 35 mm, half-automatic early “bridge” camera. It was a Chinon Genesis, which was produced in the early 90-ies. And who would blame photographers like Henri Cartier-Bresson, or Robert Capa for the noise and the low resolution of their pictures? So, in the end, it’s the motive, the composition, and, again, the tension, and the story a photograph is telling. If a photograph gets your attention in a certain way, then it is a good one. 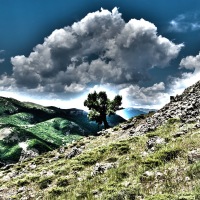 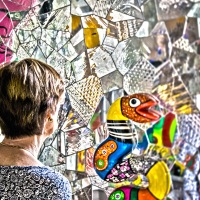